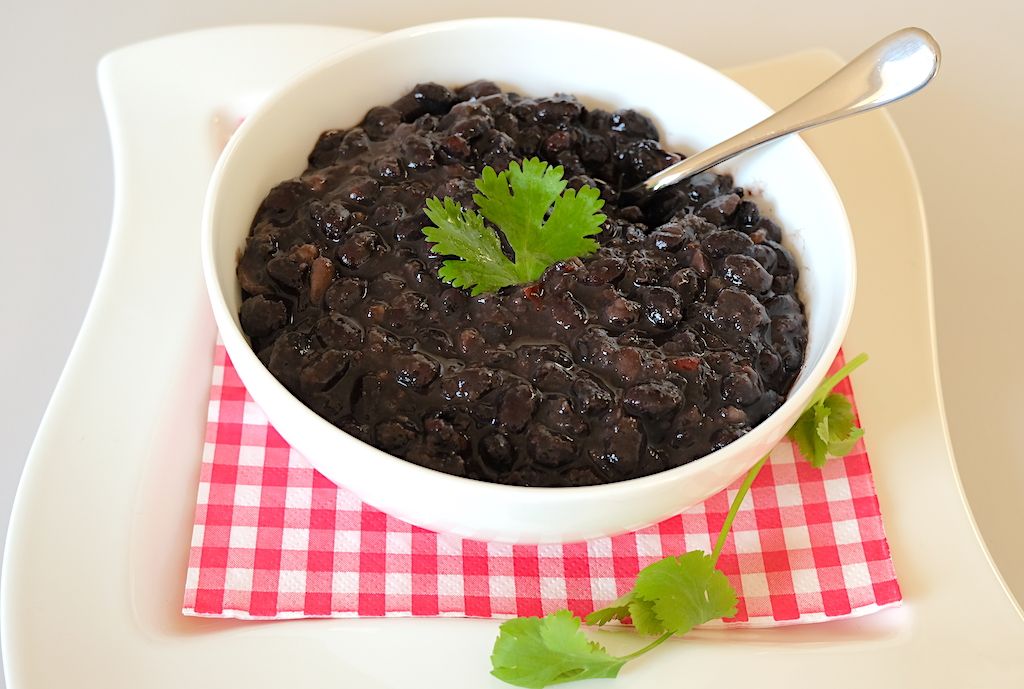 I love Cuban Black Beans! It’s a humble vegetarian recipe with beautiful dark colour and an explosion of flavour…

Miami in the early days…

I grew up spending my summers in Miami since the ’80s; a time when Cubans arrived in Florida in masses and settled-in. It was a time when it was common to see signs that read ‘We Speak English’ stuck on window-shops because most immigrants did not. With the Latin American immigration in the 80’s and 90’s, Spanish and Portuguese languages were spoken more than English, and the restaurant scene started to get more interesting and varied.

Today, Miami has changed positively. It has grown, developed and it has become a melting pot for Latin Americans, Western and Eastern Europeans and Russians. It is an international and touristic city by the sea. Now, you can find any kind of cuisine and of the highest quality. I feel lucky to have experienced the early days of that city which is home to me and to have witnessed its transition to the bustling sunny paradise that it has become.

For years, my family and I used to go to a Cuban restaurant in Downtown Miami called ‘Las Cibeles’. It was a small inexpensive restaurant with a local clientele, mostly people who worked in the area at small shops. The star dish was called ‘Bistec de Palomilla’ and I ordered it every time. It is a delicious seasoned grilled steak topped with chopped raw onions and chopped parsley and accompanied with sweet plantains, white rice and a small bowl of black beans. The first thing I did when the dish arrived to the table was to pour the black beans on top of the rice, mix it a little and taste it. That Cuban Black Beans flavour stayed in my memory as did those unforgettable family summers in Miami.

I’ve tried to find the right recipe and make Cuban Black Beans at home but I could never get the same flavour of my childhood memories.

However, the other day, as I was doing research online for that recipe; because I had a craving for Cuban Black Beans, I came across a video that seemed like the right recipe. Luckily, I had all the ingredients, except for the same kind of chillies. I used red chillies instead. Since the chillies are cooked with the beans in water, a replacement shouldn’t make a big difference in taste. Other recipes used green bell peppers. I made the recipe and the outcome was just like the Cuban Black Beans at Las Cibeles in Miami 🙂

The original recipe is on YouTube in Spanish by Yaidelin Gonzalez (click here to watch the video.) She prepares the black beans in a pressure cooker. Since I don’t have a pressure cooker I added more water and extended the cooking time. If you want them to be more liquid, just add a little more water. I use seven cups of water instead of five.

4 garlic cloves, without germ and crushed

Cuban Black Beans can be enjoyed in many ways. In Cuban cuisine, they are usually served as a garnish with rice separately or already mixed with rice which they call ‘Moros rice’.

Here are a few ideas of how to enjoy this delicious dish:

If you go to Miami Beach and would like to have an authentic Cuban experience, including flavour and attitude, I highly recommend Sazon Cuban Cuisine.

This site uses Akismet to reduce spam. Learn how your comment data is processed.

* We all hate SPAM so I promise to keep your email address safe.

Recent from the Blog

Searching is in progress